What is a Smart Grid?

The smart grid concept is evolving rapidly as technology and society adapts to new ways of generating and using energy. But what is a ‘smart grid’ really? One definition of a smart grid sees it as an evolution towards developing a modernised electric grid “that can automate and manage the increasing complexity and needs of electricity in the 21st Century”. But this does not tell us much about how it works or what it really does.
Understanding the smart grid

Another way to understand the smart grid is to look at its constituent parts; in this case the technology that makes it work. The technological foundation of the smart grid is the ‘smart meter’ that is installed at the point of consumption – these are relatively common in many countries already and feature in many homes.

The next tier is a range of other sensors, and the systems that allow the communication of data, such as a broadband or WiFi connection. The role of the sensors is to provide a real-time view of the actual power consumption, so that the power demand can be determined. These sensors are linked to software and control mechanisms that enable asset switching such as different power sources, stored power, or even the storage of energy as heat.Software is a vital component, because it uses the data from sensors to understand patterns in usage, and ensure a balance of supply and demand in a dynamic and predictive way.

Another fundamental feature of the smart grid is the distributed power generation model, made up of diverse power sources including biomass, wind, hydroelectric, and solar power or other renewables. These work in parallel with conventional ‘on-demand’, centralised power sources such as fossil fuel or nuclear power. A major technological component is the batteries (and other energy storage technologies) that enable excess energy from renewables to be stored and used later.

Finally, we can also define the smart grid by looking at the function; in other words, by understanding the application of a smart grid in a practical setting.In this sense, a smart grid can be defined as a system which gives the flexibility to switch smoothly between centralised and distributed (local) power generation, and leverages the ability to adjust consumption and store excess energy (using batteries, capacitors and the storage capacity of electric vehicles and other assets). It is a two-way system, with energy and information flowing in both directions, enabling a nimble and distributed network that is highly resilient and efficient.

The smart grid model can provide value on a range of scales, from small local grids to integration with regional and even national smart grids. In each instance, the automatic regulation of switching processes using smart software makes a broad and seamless scope for integration.So in a simple sense, the smart grid enables energy producers to store or export energy, and for consumers to have a flexible supply that adjusts to their needs in real-time. Consumers can be producers too, and are active participants in the energy market.In all cases, energy prices will be determined based on current supply and demand levels in a dynamic and transparent way. This eliminates the need for brokerage – saving money and boosting efficiencies. The flexible ability to offer lower prices at times of high supply can encourage flexible consumers to alter their consumption patterns, and in this way peak demand curves are flattened and everyone gets a better deal.Energy consumption patterns are also easier to understand in the smart grid, because the data is readily available, if the right tools are employed.

A Local Smart grid is especially useful for lower-voltage DC applications, but can also work for domestic AC consumption. This can be very small scale, consisting of small solar arrays or even micro wind generation. The setting here might be your local street, or a small farm. This will typically involve energy storage using batteries (when energy is plentiful), or the export of electricity to the local area network, if the power generation is high enough.Many home solar PV installations are already equipped with both smart meters and the ability to export energy, so this is a model that many people are already familiar with. It also makes a useful starting point for understanding the smart grid on the larger scales.

A primary integration of a local smart grid is with electric vehicle (EV) charging stations. These can make use of excess power supply to charge cars parked on the same street. As the power has less cable to travel through (due to the short distance) there is less of a voltage drop which adds a small efficiency to the system, compared to exporting energy. Larger efficiencies are gained however by managing the generation-consumption balance on a local level. For one thing, it reduces reliance on centralised energy sources.

By keeping local energy within the local system, it also eliminates the need for installing heavy-duty cables for the export of energy into a centralised system. This would include costs of economic damage from digging up the ground, closing roads, or disrupting businesses. The cost of the new cables themselves is not insignificant.

Also there is an economy of scale to consider, as the amount of exported energy would have to be quite significant for it justify being converted into the high-voltage AC supply needed for the centralised distribution model.A local smart grid will typically utilise domestic-scale solar PV arrays or small wind turbines which generate a DC current at source. This is perfectly suited for a smart, local distribution network, as it can be easily stored in batteries and used for high-efficiency LED lighting which works well with low-voltage DC sources.

For a smart grid within typical office buildings there is the possibility to utilise bidirectional EV charging points. These utilise the charge capacity of parked electric vehicles to supply peak demand at times when the car will not be needed (and still has time to charge back up again). This is already used in a number of situations. Technology is a key enabling feature here, as the system relies on predictive software and smart algorithms to know which vehicles can be used for power storage (because they will not be needed soon). This makes perfect sense, as the cars are available during times of peak energy demand, but are not being used in any other way. They are just sitting there. 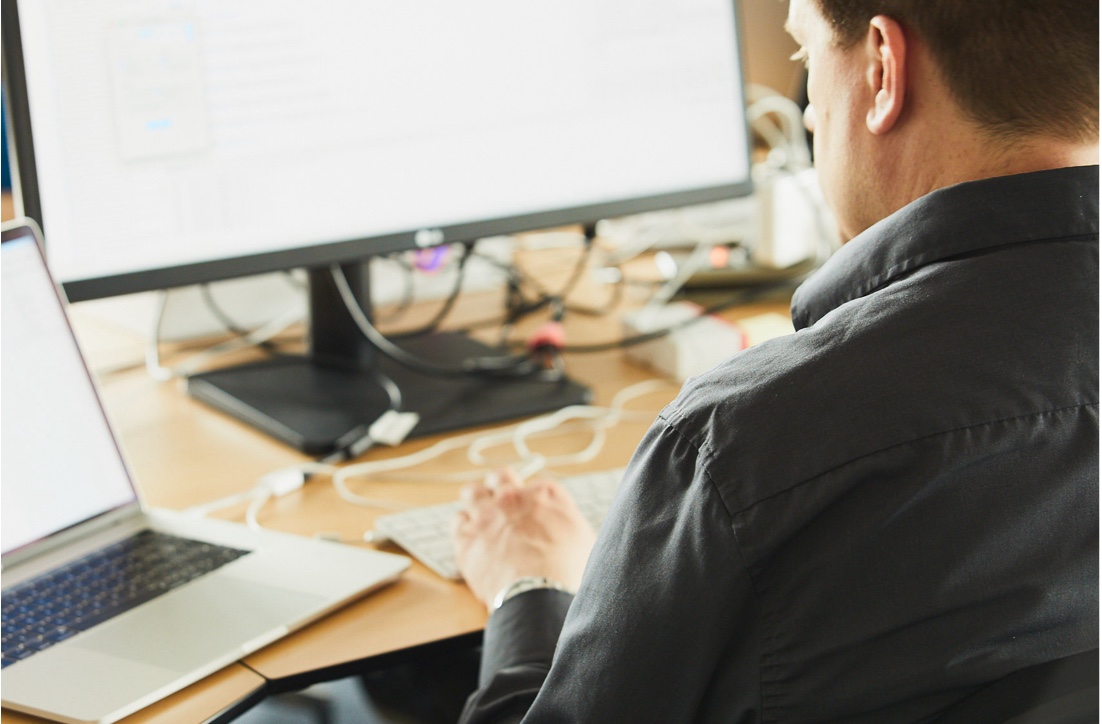 Caption beneath the photograph

Regional smart grids cover a wider area, consisting of multiple entities and medium-scale renewable generation. These grids can cover the area of a city, for example, or may include a cluster of producer-consumers across a region. At the most basic level it consists of clusters of local networks, but also will include significant power generation from larger wind turbines (on farmland, for example), or larger solar arrays.

As they expand, local smart grids will start to cover entire regions within a country. These can be more complex systems, as the grid at this scale will also include industrial consumers who require high voltage 3-phase supplies, in addition to regular medium voltage or domestic-level consumers. This is when the value of software becomes truly apparent, because it is needed to intelligently balance the loads during peak demand or surplus production periods. It is also an opportunity for existing energy companies because they are able to offer their expertise at this scale. These grids include the perfect customers for the kind of flexible energy contracts and other services that will become increasingly widespread as the smart grid concept and technology continues to grow in popularity.

One of the longest-running regional smart grid models has been the Solar Cities project in Australia. This project has been funded by the Australian government, which has already contributed AUS$94 million to 7 city-wide projects. This project seeks to utilise the abundant solar energy available, using a variety of systems including solar hot water and PV arrays connected with a smart grid.

These ‘Solar City’ projects helped to develop and refine the technologies needed to roll out regional smart-grids on a larger scale. Solar Cities was essentially a ‘proof-of-concept’, and enabled the harvesting of a great deal of valuable data. In the Perth Solar City, for instance, peak demand was reduced by 25%, and the use of solar hot water and solar panels combined, reduced the average household electricity consumption by 58.9%.

As discussed earlier, in the traditional power distribution model centralised power production is transmitted on a national scale across the transmission grid. This is normally done using overhead or underground cables carrying 3-phase AC at very high voltages. The electricity then goes through multiple substations where the voltage is stepped down and supplied to industrial consumers (high voltage) and eventually residential consumers (240v AC or 120v AC).

To supply the transmission grid, power generation needs to be stable and harmonised. It works on a 3-phase AC system, which means the poles need to be perfectly synchronised. This is pretty easy when only a few power stations are supplying the grid, but becomes a technical challenge when hundreds or thousands of renewable sources also want to contribute. While not impossible, the transmission grid is a much more demanding system and there is a significant challenge to bridge this capability gap.

As we know, renewables are a fantastic source of energy, but they are unpredictable too. They are intermittent, and have high seasonal variability. It would clearly be a challenge in a northern European setting to rely exclusively on solar power, year-round for the national power supply. Although in the darker winter months wind power can be plentiful, there is always going to be a shortfall or surplus that needs to be managed, and to accomplish this on the national scale is always going to be difficult.However, provided smart grids are sufficiently widespread at the local level the challenge is reduced. There should be no need for a local or regional grid to export onto the transmission grid. Indeed, as local smart grids become more capable of self-regulating at the local scale, the national transmission grid becomes less significant, and easier to balance due to the peak load reduction at the local scale.

This is a tip module

A key enabler of the smart grid is the technology. As we have seen, sensors are important for this because they give us an understanding of consumption levels and consumption patterns. Fault Location, Isolation, and Service Restoration (FLISR) technology is already a feature of a modern power grid, so there are already some elements of the smart grid in place. As digitisation of the industry continues, the challenge then becomes how we manage this data and the communication between different systems. In a similar way to the development of ‘smart home’ technology, the growth of smart grids will require common communication protocols and the development of a secure and reliable software network. While governments play a role in the regulation of these industries, it is the role of energy technology companies like Jules to offer the technical solutions needed to connect the parts of the system into a cohesive ‘whole’.

Jules provides a software platform which enables consumers and producers (and the prosumers) to all take advantage of their positions in the market. By cutting out the position of the broker, market participants become empowered to maximise their usage or production capabilities with risk management and price-hedging options. This is how democratisation of the energy market happens.

More tips about the energy transition, follow Jules, Paul and Jos on Linkedin.